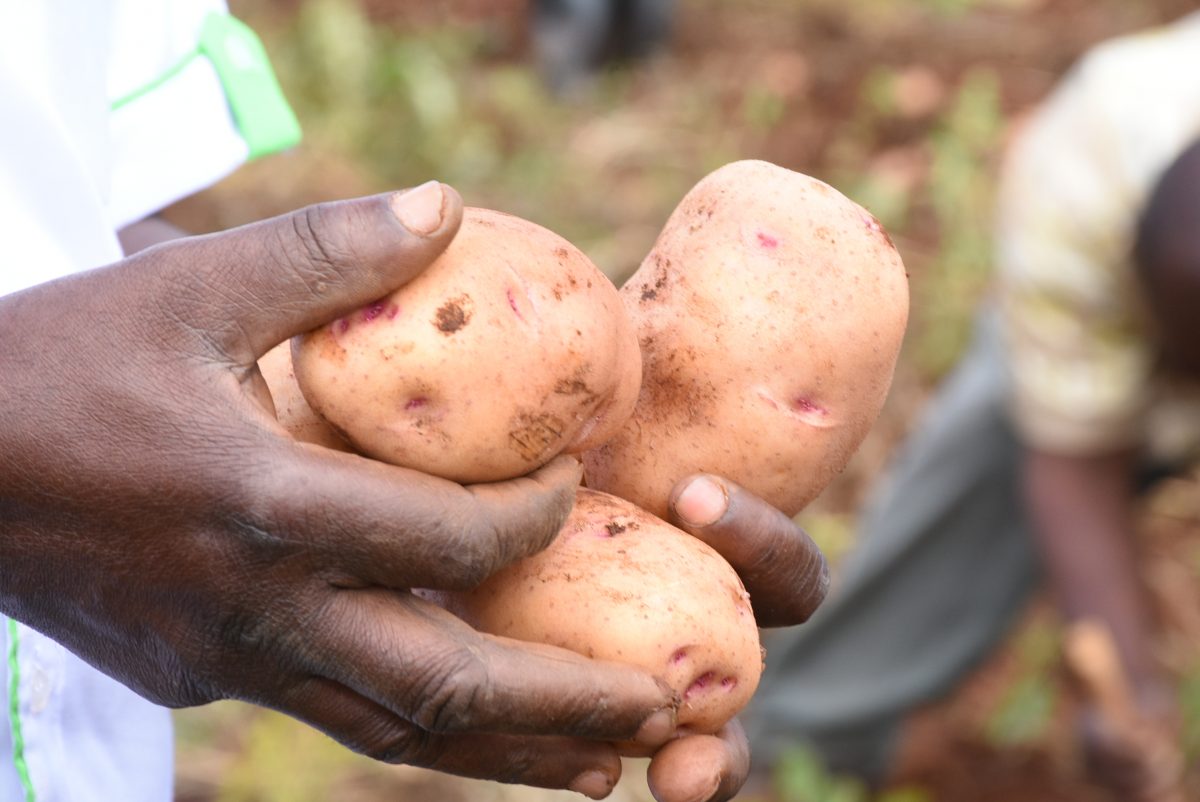 Agriculture sector plays a key economic role for Nyeri County’s residents seeing that most engage in the trade in both small scale and large scale. In line with this, under the stewardship of H.E Governor Mutahi Kahiga, the County Government of Nyeri has continued to support Nyeri farmers through private public partnership with international entities and donors.

One of the notable projects from such partnerships is the Agricultural Sector Development Support Programme (ASDSP) which has been running in the county for the last nine years. ASDSP has been implemented in two phases, focusing on the three value chains of cow milk, Indigenous chicken and Irish potatoes.

In phase one, the farmers through capacity building spent Kshs. 38 million while in phase two which started in year 2017- 2022 has been allocated Kshs. 37 million.

The programme aims at promoting commercialization of priority value chains through capacity building of the value chain actors to increase agricultural productivity.

According to ASDSP County Coordinator Robert Wamani, the programme is geared towards coming up with sustainable value chains for both income generation and creation of employment.

The ten-year programme ending next year will have benefited thousands of farmers in the county who have been trained through farmers’ groups.

“In collaboration with our partners, we have also focused on matters of inclusivity making sure we engage both the youth and women as well as focus on environmental resilience. We have covered all the eight sub-counties, with over 3,000 farmers benefiting through this programme,” added Wamani.

Nyeri farmers have every reason to smile seeing the numerous benefits they have reaped through this programme.

Antony Kingo’ri, a dairy farmer from Othaya and one of the beneficiaries of ASDSP noted that he has received extensive training on embryo transfer and animal feeds which has not only improved his dairy pedigree but also increased milk production.

“I wish to thank the extension officers for teaching us on embryo transfer. I have adopted the technique and I’m reaping great results. My cows are now pedigrees (pure- bred) and the calves are strong. The benefit of making animal feeds at home is that the product is of high quality and safe consumption,” noted King’ori.

Mary Muthoni,a dairy farmer also gave credit to ASDSP where she learnt about growing hydroponic fodder which is grown from barley is of  high quality of supplements and is required in low quantity.

“I started farming the crop about three years ago and it has been of great benefit to my cows as they are now healthier and milk quantity has increased. I would like to urge fellow farmers to learn more about this technique. The ASDSP can also link you to financial service providers to get some funds which will help you in the construction of a hydroponics housing unit,” she added.

Ann Muchomba, a service provider and an Irish potato farmer from Kiambogo, thanked the ASDSP for the facilitation of groups that in turn helped them to reach more farmers in the community. She also thanked them for the training offered in Nyandarua as well as the benchmarking programmes.

“The groups have learnt how to purchase products to help minimize cost of production while boosting their yields. Further, I encourage farmers to learn about value addition to help create maximum production as well as reaping benefits,” added Muchomba.

Through the ASDSP, the youth have also been trained on production of high quality produce using modernized techniques. One such group that has benefitted from this programme is the Jipange Kimuri Youth Group, whose production has increased gradually with the farming skills gained through the programme.

Alice Kiberenge, an input supplier of chicks, asserted that the fact that they were able to come together as a group(Rware Breeders)  hailing from areas such as Othaya, Kieni, Mukurwe-ini and Nyeri through  the intervention of the ASDSP has enabled them acquire skills and obtain links with the Poultry Value Chain players.

“The ASDSP has brought us together as a group and has trained us on the importance of coming together while also providing us with the necessary technical skills in chick brooding. The programme has also provided us with links which have gone a long way in ensuring we get a market for our chicks which was quite a challenge before,” she added.

Josephine Chege, an indigenous chick producer, also gave credit to the ASDSP for training them on chicken rearing which has contributed to extreme notable growth. She also encouraged women to join such groups which will make them dependent on themselves rather than waiting on their men for provision.

“The ASDSP has trained our group on the right way of rearing chicken as well as the necessary measures to be taken in cases of sick chicks which has really made us grow our flock. As soon as they stepped in, it became easier for us and for this, we are very grateful,”noted Josephine.

Farmers have also benefited with trainings on hay production as well as production of biogas.

One beneficiary Eliud Kangethe, noted that he received training through the ASDSP on how to grow good quality hay, which he cultivates on his four acre piece of land. He acquired knowledge through the programme.

“Through ASDSP, I was provided with skills on my four acre piece of land which I use for hay production which I later store in storage units. The hay harvested ensures I have animal feed even during the dry seasons. Further, the management of the grass is easy because it requires no cost. One acre provides two hundred bales and only two are required for one cow for one feeding,” he added.

ASDSP is also committed to conserving the environment hence has put in efforts to alternative sources of energy. Through the programme, farmers have been trained on biogas production which is a renewable, as well as a clean, source of energy.

Lydia Kagema a retired teacher from Tetu sub-county is a living example of how transformational the alternative energy is as she now produces biogas. She elaborates that energy produced from the biogas has helped in minimizing the cost of electricity at her home, as well as conserving the environment by reusing the waste product produced by her animals.

“I am a happy person since biogas has significantly reduced my electricity costs. Previously, I used to pay over Kshs. 5,000 but right now I am paying Kshs. 500 and I’m using it for several purposes including cutting nappier grass using a chaff cutter, lighting my house and cooking,”she added.

Other achievements from ASDSP include:

The County Government of Nyeri is determined to retain such collaborations as the one they have with ASDSP as it will notably foster agricultural productivity for Nyerians.

Fresh water ornamental fish production is majorly done in captivity whereby fish farmers rear the fish in ponds and tanks. Despite there being over 200 species of fish in the ornamental fish trade in the country, it is dominated mainly by the goldfish, mollies and Koi fish species.

The conceptualization of this farm came about in 2011 after Wilfred attended a training session on fish rearing. Wilfred decided on ornamental fish as at the time since it wasn’t an area that many farmers had ventured into thus creating a market gap.

Savannah Ornamental Fish Farm has numerous ponds for various purposes, be it egg-bearing, hatching or growth depending on the type of fish as they all have different specific requirements for effective growth. Several methods exist for the breeding of ornamental fish.

Savannah Ornamental Fish Farm, whose mission is to be the number one fish farm in the area as well as to be recognized in the country earns Wilfred and his family a decent living from their fish sales and from the training activities they offer on ornamental fish rearing. He urges the people of Nyeri County and ultimately Kenyans to embrace ornamental fish farming as it is a proven source of a stable livelihood and as it currently accounts for only 3% of the fish in aquaculture in the country.

Ornamental fishes form an important commercial component of aquaculture, providing for aesthetic requirement and upkeep of the environment. Not only does it provide a space for people to do what they love but also an income-earning venture. Unlike other businesses, this type of fish farming requires less labour and space hence a good business venture particularly for the youth.