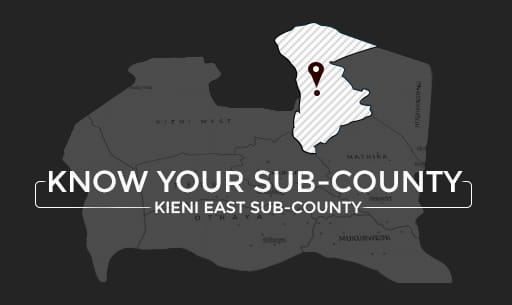 The sub-county is part of the larger Kieni constituency which is the largest representative area in Nyeri County, occupying 52% of total land mass. The constituency is represented by Hon. James Mathenge (Kanini Kega) in the National Assembly. It borders Mathira West, Nyeri Central, Kieni West sub counties, Laikipia and Meru counties in the Mt. Kenya forest.

Kieni East sub-county is located on the leeward side of Mt. Kenya, making some parts of it dry as it features semi-arid areas. However, despite being a semi-arid area, it is without a doubt one of the food baskets for Nyeri County as it has good soils and a favourable topography. Most of the crops grown include Irish potatoes, maize, beans, cabbages as well as rearing of livestock. With the agricultural sector being the mainstay of the economy of Nyeri County, the County Government of Nyeri has endeavored to focus on increasing water supply in the region. As such, the county government has drilled several boreholes in the sub-county so that farming is sustained. With the increased water supply in Kieni East, there has been a boost in food production not only for the county but also for the country as well.

Through programs such as the Kenya Climate Smart Agriculture Project (KCSAP), area residents have benefited from learning about sustainable livestock production systems in dairy, poultry and goat farming as well as rehabilitation, desilting of dams and construction of masonry tanks which also provide water for irrigation purposes further boosting food production.

The area also has a high concentration of aquaculture activity with support from Aquaculture Business Development Programme (ABDP), a project under the World Bank. The programme has increased the incomes, food security and nutritional status of the residents in the sub-county.

The county government is also setting up an ultra-modern Naromoru Level 4 Hospital with a-175-bed-capacity. The hospital will ease the suffering of Kieni East residents who have had to seek specialized treatment in neighboring hospitals in either Nyeri, Karatina or Nyahururu. The project is in conjunction with the World Bank under the Kenya Devolution Support Programme (KDSP).

The sub-county also boasts the Chaka Market which is being upgraded into an industrial hub to serve not only the county but the entire Mt Kenya region. The market is expected to have an open air market for food traders, clothes traders, matatu and bodaboda terminus, banking halls, a Sacco, cold rooms, eateries and a wellness center among others. This project will give value and income to farmers which will in turn transform their lives. In addition, a modern railway station is being set up at Chaka, with the revival of the Nairobi-Nanyuki railway line. The station will ease the transportation of farm produce and animal products from the region to the markets.

Road infrastructure in the sub-county is quite developed, with the county government upgrading most of the feeder roads. The A2 LAPSSET corridor cuts across the sub-county, which has improved interconnectivity across the counties. The proposed Tagwa-Mbiriri-Kimahuri-Warazo Jet road, which is to be upgraded to bitumen standards, will also ease the movement of people and transportation of farm produce once complete.