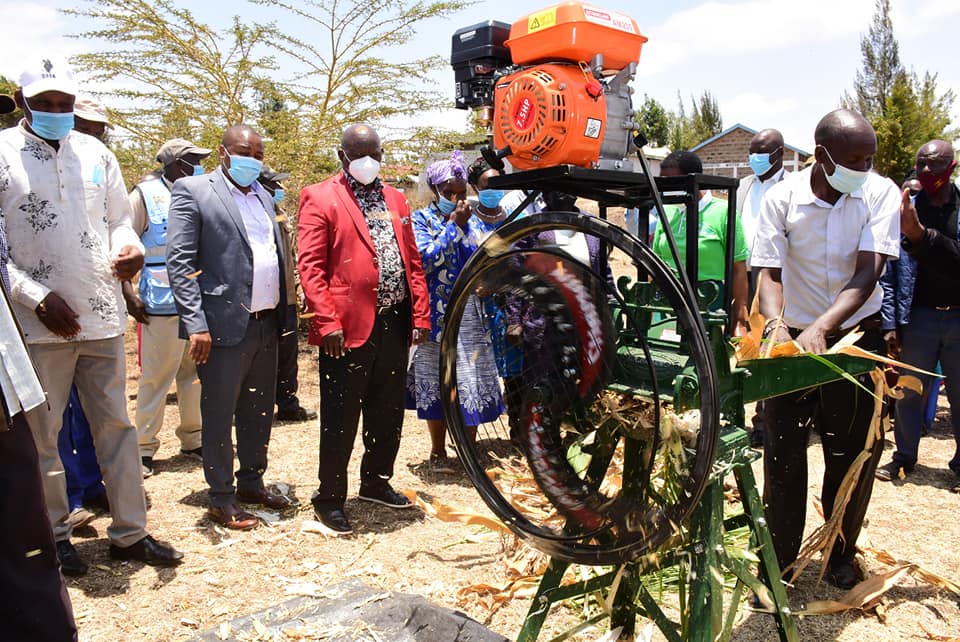 For most small scale Kieni dairy farmers, the challenge of limited dairy production has been a perennial one. This has been majorly attributed to the fact that in most times, they use locally available feed resources, such as natural pastures, crop residues, cut-and-carry grass, forage crops and local feedstuff as well as communal grazing which significantly inhibit their dairy cow’s milk production.
Using supplements both energy and/or protein-rich feeds for dairy animals has been linked with increased milk production. Upon the realization of the same, farmers from Kieni started sending proposals in order to source for donors who would fund them with capital to purchase machines for production of high quality feeds.
At the sleepy village of Gatuamba in Thegu River ward, Kieni East sub county, Njung’wa Community Based Organisation is one of such groups which forwarded a proposal to the World Bank through the Kenya Climate Smart Agriculture Project (KCSAP).
KCSAP is a programme jointly funded by the Government of Kenya and the World Bank. The programme aims at increasing agricultural productivity and enhancing resilience and coping mechanisms to climate change risks in the targeted smallholder farming and pastoral communities.
The 26 Njung’wa CBO members were overjoyed after their proposal was accepted and were funded with Kshs. 920,000 in the financial year 2020/2021 which they used to purchase a feed mixer and a hammer mill.
Feed mixers are used in feed mills for the mixing of feed ingredients and premixes. The mixer plays a vital role in the feed production process, with efficient mixing being the key to good feed production. If feed is not mixed properly, ingredients and nutrients will not be properly distributed when it comes time to extrude and pelletize the feed, or if the feed is to be used as mash. This means that not only would the feed not have nutritional benefit, it would be bad for the animals that are eating it.
On the other hand, a hammer mill is a farm machine which mills grain into coarse flour to be fed to livestock. The mill’s purpose is to shred or crush aggregate material into smaller pieces by the repeated blows of little hammers. These machines have numerous industrial applications including: Ethanol plants (grains).
The members, whose targets go beyond eight litres per cow per day, have significantly benefitted from the equipment provided which they now use to produce high quality feeds for their animals subsequently increasing both quality and quantity of milk produced. Additionally, the equipment which was purchased and installed after they rented a room at Gatuamba trading centre, has been of great help, as the feeds produced have been extended for use in other value chains including poultry, goats and pigs increasing production in the same.
The group’s chairman Michael Ndiritu and secretary David Gitonga expressed their gratitude to Governor H.E Mutahi Kahiga and area MCA Hon. Richard Kamuhia for making their dream a reality.
“We are grateful to the governor, the MCA and the KCSAP team for facilitating the purchase of the equipment for us, as they have been of great benefit. We were also provided with rabbits for rearing and Hash Avocados for nutrition improvement for which we are thankful for,” noted the chairman.
“The group will start arrangements of settling in our own plot so that we can expand our work and use the project commercially to ensure our project is viable. This is a dairy mechanization project which will notably transform this area as well as create employment opportunities for local youth,” added Gitonga.
A member, Gerald Warui said that this is a great milestone since the machinery has empowered the group members, the local farmers and created opportunities for youth who will be employed to handle the machines.
The farmers have also been trained by Kenya Agricultural & Livestock Research Organization (KARLO) which is a service provider based in Naivasha.
David Mbugua, an official from KARLO noted that the farmers have been trained on innovation practices, feed formulation, where to source feeds, how to grow and store quality forages for their livestock to ensure availability of feeds throughout the year, how to ensure quality milk and reduce cost in production among others.
The Chairman of Thegu Community Driven Development Committees (CDDC) Githaiga Muchemi said 55 micro projects in Lusoi and Lower Karkuret have been funded with a total of Kshs. 40 million in the last two years, in the value chains of Irish potato, beans, indigenous chicken, dairy and natural resource management, which has notably transformed the lives of Kieni farmers.
Meanwhile, courtesy of KCSAP, the Governor issued 14 chaff cutters, 10 forage choppers and three bean threshers to Gathathi-ini Men Self Help Group in Thegu River ward, which will help in boosting food production and livestock farming in the area. He also commissioned and handed over a water project site for the proposed rehabilitation and upgrading of the Lower Kakuret Irrigation Water Project to the contractor.
Further, Governor Kahiga presented cheques to Gakawa and Thegu Community Driven Development Committees worth about Kshs. 27.35 million and Kshs. 23.61 million respectively. He also issued out knapsack sprayers and hose pipes to members of Common Interest Groups and Vulnerable Marginalized Groups in Thegu and Gakawa wards.
In this financial year 2021/22, about Kshs. 8.88 million has been allocated for the upgrading of water intake, conveyance and distribution of irrigation pipes (7km) of Mureru Irrigation Water Project. The project will benefit over 566 farmers with coverage of 87 acres.
Governor Kahiga has urged Nyeri residents to form more community groups so that they can benefit from such projects in order to enhance their lives wholly. The County Government of Nyeri is committed to continue collaborating with KCSAP to increase agricultural productivity in the county seeing that agriculture is the backbone of our economy.